On 17 June 2021, a Russian-Bavarian Online Workshop on Artificial Intelligence (AI) and Law was held, jointly organised by the Julius Maximilians University of Würzburg (JMU), BAYHOST, the German House of Science and Innovation (DWIH) Moscow and the Representative Office of the Free State of Bavaria in the Russian Federation. 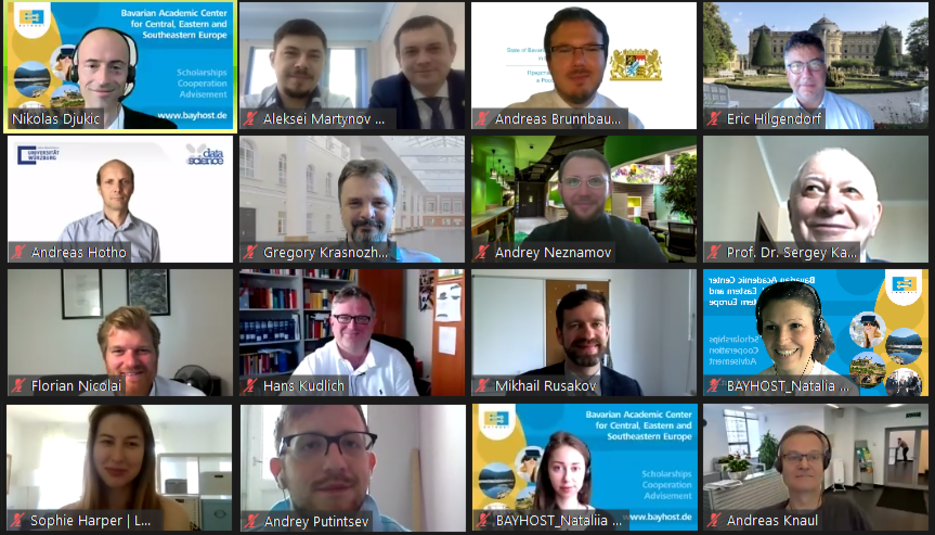 The Head of the Department of Economics and Science of the German Embassy in Moscow, Matthias Fischer, opened with a welcoming speech on the topic of "Autonomous driving and new mobility".

15 experts from science and practice highlighted different aspects of the interface of AI and law. Among other things, the latest innovations in automatic data analysis or autonomous systems were presented. However, the event also addressed the question of responsibility for possible harmful consequences of the use of AI in areas such as medicine or road traffic.  The legal aspects of the use of AI in the justice system were also presented.

From the Russian side, leading experts participated in the workshop: Dr Andrey Neznamov heads the Centre for AI Expertise at Sberbank and is the author of the Russian AI Strategy and the Russian Concept for AI Regulation. Russia adopted a National Strategy for AI Development in 2019, which includes support for scientific research. The transition to advanced digital production technologies, robotic systems, advanced materials, the development of Big Data systems, machine learning and artificial intelligence is one of the priority areas of the strategy for the scientific and technological development of the Russian Federation.

Other speakers came from top universities such as the National Research University Higher School of Economics, a partner university of JMU, or Tomsk State University.

On the Bavarian side, two of the Bavarian AI nodes established as part of the High-Tech Agenda Bavaria were involved, among others: the AI node "Data Science" (coordination: JMU) and the mobility node (coordination: Ingolstadt University of Technology). The Julius Maximilians University of Würzburg was also represented by the RobotRecht research centre and the Center for Artificial Intelligence and Data Science. The former deals with the legal challenges posed by the technical development in the field of autonomous systems and AI. In contrast, the Center for Artificial Intelligence and Data Science conducts basic research as well as applied research in the field of artificial intelligence in data science to support science and society.

More than 40 participants followed the 4.5-hour workshop, including researchers and students from 8 Bavarian and 12 Russian universities as well as representatives from 12 companies.

The workshop contributed to the Year of Germany in Russia, which is intended to provide new impulses for Russian-German relations in various areas of life such as education, science and innovation.

The workshop contributed to the Year of Germany in Russia, which is intended to give new impetus to Russian-German relations in various areas of life such as education, science and innovation, as well as to the German-Russian theme year "Economy and Sustainable Development 2020 - 2022".

The main organiser of the event was the Bavarian University Centre for Central, Eastern and South-Eastern Europe (BAYHOST), which promotes academic exchange between the Free State of Bavaria and countries in Central, Eastern and South-Eastern Europe. BAYHOST supports Bavarian universities and universities of applied sciences through its international and interdisciplinary contacts and competences. The promotion of cooperation in research and teaching as well as the dissemination of knowledge about the higher education system in Russia form a further focus of BAYHOST's work.